I was pretty late coming out. Officially, the 23rd of June 2005, at the age of 31. Most of my close friends all knew, although for me it was like shedding a great weight from my shoulders. Something I had shrouded myself in for years. The word GAY held me still and in some way paralysed me for so many years. I believe now, looking back that I had internalised homophobia. I remember I’d flinch at the word. I’d constantly questioned whether I was normal or some sort of freak that was going against nature. Its bizarre how much time we can waste caught inside our own prison, or more appropriately, in this case, the closest.
So, it all came about one Summer Solstice on top of the Hill of Tara. I had gone there in the late evening with my house-mates. It was the first time I had experienced Tara at this super special occasion. There was such a vibrance and energy about the place. Kids running in circles and people everywhere smiling and chatting. It’s quite a magical feeling. Something I had always romanticised about and the reality was aligned with my vision.
We moved around the gathering, taking time to sit and absorb this wonderful sense of togetherness. I felt totally at home. As the night slowly surrounded us, more and more people began to leave. My housemates said they were going to head back. I decided I’d stay. I felt there was something here for me.
I was drawn towards a fire surrounded by a small gathering of people. A number of drums were being played and it wasn’t long before I found myself standing lost in a primordial hypnotic trance. I do remember being aware of one of the drummers in particular and its because I thought he was gay. This is something that repeated many times over the years of being in the closest. I’d notice someone in a crowd or gathering that I thought was gay and it would immediately make me feel uncomfortable. I think its because I thought they’d out me or perhaps see behind my facade and shout out, “you fake”. I remember watching this guy and seeing his beauty as he orchestrated his magic with the jamboree. It was nothing to do with fencing him, just seeing him content in his being, his spirit so to speak and realising how beautiful he was.
So, good old brain 2000 Sam was now totally distracted and feeling a little anxious. The usual overthinking kicked in and this stupid focus on my observation started doing its usual running around in my head. “Is this to do with you being gay? Are you gay? Why do you keep seeing other people that are gay? Why can’t you just accept this? Could I be happy saying I’m gay to people? Will people accept me? Is it natural? Blah, blah, blah, inner chatter to the max. Couldn’t hear the bloody drumming over the humdrum that was going on inside. God, I don’t know how I survived it. Anyhow, slowly over a matter of many hours, the lovely group of people had convinced me to join their nice cosy circle. Up to that stage I had kind of peered over their shoulders sheepishly, in the cold away from the delicious toasty fire. This was all the fear inside, keeping me nice and isolated. Just the way I wanted it!
So, no one outed me. Daylight started showing its welcome face. Phew. Got through another day without being found out… until in some random, friendly conversation, between a group of 3 guys, one says, ” you look like that guy off the telly”. My gay defences were alerted. I could sense something was coming from the practical joker. “What’s his name?”. Sam’s there shrugging his shoulders, head, body. “That guy Brendan Courtney. You look just like him.” At this stage, the heart starts beating faster. Head starts racing. Wondering is this guying trying to make me feel uncomfortable. Fearing how far he might take it. Now, remember. He’s only likened my face to another human. I’m standing practically breaking out in a cold sweat over that the other lads are going to shout out, “Of course YOU’RE GAY”. Of course, that’s not what happened. I believe I or someone else noticing my uncomfortable predicament, moved the conversation along. It wasn’t long though for the practical joker, who was actually a good guy, brought the conversation back around into uneasy territory. That was it. After another few moments, when the time was right. I did my usual look around, suddenly aware of the time. Excused myself and headed off towards my car. Made some quick farewells to the remaining group and was off. 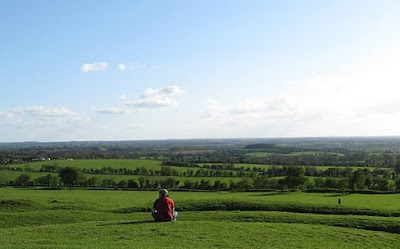 Walking across the field in a quick pace. Anxiety starts easing as I look at the beautiful morning and the spectacular surrounding I was in. Then I noticed someone rushing behind me. The guy. WTF did he want. Shit. He rang up to me and I stopped and turned. “Here look mate, sorry if anyway I made you feel uncomfortable”, he said. I stood there nodding my head in denial, “No, no, I don’t know what you mean.” Inside – ‘please go away and let me get to my car and get out of here’. He then preceded to tell me his story. His cousin was gay. Why is this total stranger telling me a story about his gay cousin. WHY? Anyhow, he said how he had being a homophobe in the past. He knows now that he used to say stupid hurtful things around his cousin. He didn’t understand. I’m standing there cringing inside and out, wanting the ground to swallow me up. So, then he took the time to get to know his cousin and he realised, “We’re all the same. Yeah, he has his things. I’m not into that, although he’s a really good guy.” The conversation went something like that. Excuse me if you are the guy and I don’t have it word for word. The point is, this total stranger was standing there on the Hill of Tara trying to make me feel okay. I was feeling fear. I forgot all the surrounding beauty. I just wanted to get out of there.
So, I thanked him for his lovely story and left. This time walking a little faster. A moment later he was there again. “Sorry, did I say something wrong.” Who is this guy? “No, mate I’m just heading home. Cheers, good luck.” Walk another few steps. Hand placed on my arm again. I don’t remember what he said or I said. Finally, he smiled and turned away. I turned and started walking.
That was the point. Just there. The moment where everything changed. I remember being overwhelmed by the countryside spreading out in front of me. The sky strewn with white feather boas of clouds. The air, fresh, alive and cold filling my lungs. It was pure joy and wonderment. I was gay. It was one of the most amazing moments in my life, to finally let go of those chains. There cold embrace torturing me for so many seconds, hours, days, weeks, months and years. I knew everything was going to be okay. It was as simple as flicking a switch and as difficult as crossing an ocean in a rowing boat. That guy had opened something inside me that needed to be opened.
My journey home in the car was my plan of my coming out day.
SHARE


Warning: array_key_exists() expects parameter 2 to be array, null given in /home/customer/www/openfm.ie/public_html/wp-content/themes/vice/inc/related_posts.php on line 7

What Is Trap Music?
Updating playlist